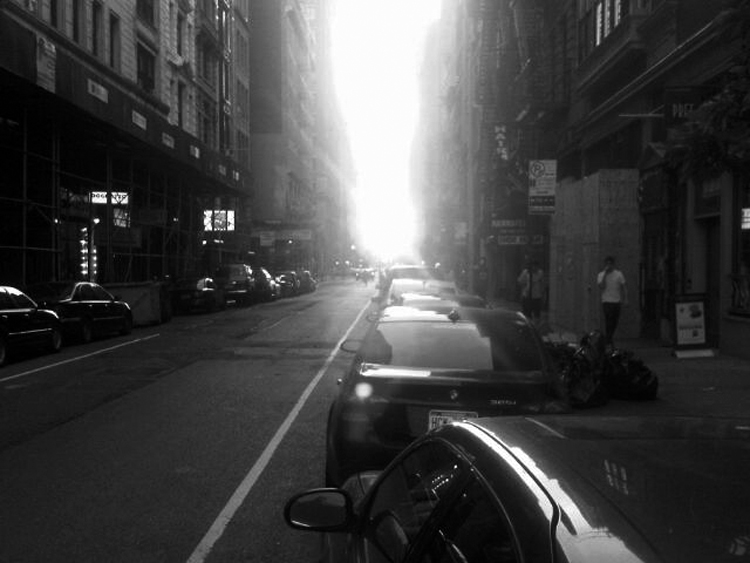 We were already on our third beer, looking at tourists sailing on the Aegean when Nikos leaned over the table. “You’re not straight enough ‘til you fuck a guy up the ass,” he said. It was 1991 and that was my last summer at my father’s village in Greece.

“Is this your Greek Orthodox cross you’re wearing?” A VP from work narrowed his eyes during lunch in the late ‘90s in Manhattan.

“Yes,” I apologized, resisting the temptation to slip the cross back under my shirt.

The VP glanced at the hedge-funders in surrounding tables, pushed aside his potted shrimp and undid the top button of his fine baby blue shirt. He gave my gold chain an involuntary once-over and I thought of Nikos and how Greekness and pride—unprocessed masculinity really—sells. When the check arrived, I beat him to it. I paid for both of us in cash, though I didn’t have to. I was just an Associate. I wasn’t even supposed to. The VP smiled the way VP’s smiled: like a schoolmaster who summons his favorite rowdy student. “You’re an odd but proud fucker,” he finally burst and a connection between being unrehearsed and being a man ticked off for me.

I was good at amalgamation, at spinning—I was in management consulting—so I worked it to be the “peasant” associate. Spontaneous. I played up my Greek accent, worked out without a Walkman and used cabs instead of our car service. I talked to clients confidently, using grammatically wrong words like “optionality” instead of “real options.” I saw a polished, feminine side in the white-collar man and pounded it. Isn’t that what Nikos would do?

“Strategic engineering,” I interrupted a colleague once as he rambled on about our firm’s “decision analysis-backed hybrid strategic alternatives.”

“How mannish,” the client gasped, playing with her necklace.

“We take risks ‘cause that’s what men do,” I said and eyebrows rose.

“Pick up backgammon to see how to deal with strategy and risk!” I talked back to the VP who sent me to sensitivity training. A week later, he still asked me to pitch to the highest-yield client. I began having fun with phallic capitalism. I dealt with privilege like a man, as if luxury was an accident. A by-the-way. I lived in hotels—“to be by the clients”—and slept around, sometimes with people I’d present to a few hours later. “In-the-know eunuchs,” I called Wallpaper-subscribing colleagues only to share tequila and substances with them after hours. “It’s a guy thing,” I’d shrug and step out for more supplies or sex. And that’s when I met Ira.

We were crossing Manhattan’s West Side Highway in opposite directions when we caught sight of each other and nodded. Ira was with a friend. Still we shook hands and exchanged phone numbers. I never called of course: I was already an addict. Instant gratification was the only gratification.

But addicts somehow manage to find one another. Three, four years later we met again, this time online, either on Gay.com or Craigslist—neither of us is sure. Astonishingly, we both remembered our highway encounter. We hooked up immediately. We had a brief  and dysfunctional, and yet somehow caring affair. And when it ended we were family. Became family. In that New York sense of the word. He opened his Greenwich Village home and his friends to me. He accepted me as is, Ambien and otherwise dependent. “It’s OK to be an addict,” was the motto at One Fifth, Ira’s apartment and salon for coming-out enthusiasts. “It’s what you do about it. Oh, and please don’t use that bathroom. There’s Xanax in there.”

Ira was a film director, about to shoot Married Life, and I was in the business world. We didn’t have much in common and at the same time we did. We were both addicts managing millions in biotech R&D or movie budgets. But that was 2006. Everyone was a functional addict then. We got promoted and fired, only to land even better jobs or projects. We hid behind gung-ho Belstaff luxury and bespoke pregnancies. Everything seemed possible, effortless and connected. I even heard from Nikos, someone I’d lost touch with after leaving Greece. Actually the email came from his daughter. “My father is not comfortable with the computer,” she explained. She asked if I lived in New York. Had I been back to Greece for the Olympic games? Had I followed Greece’s run to the European Champions title, or watched them win the Eurovision song contest? I read the pride behind her emails. She wanted to study fashion in New York, “either at Pratt or FIT” and wondered if I lived near the Meatpacking District, an area she knew from Gawker.com. Spirits were flying high in both sides of the Atlantic.

Three years later, in the midst of the who’s-next meltdown, One Fifth was still a court for gays, lesbians and addicts. Ira did the math for you to change or sustain your life. He emailed, “Monday,” to find “the right writing class, now that you don’t work in Wall Street anymore.” He threw the bash for the friend who’d move back to Austin or found a place for you to crash after you subletted your loft. “Come along to my support group at The Center,” he offered in his soft-spoken, non-threatening voice. In a way Ira became more important. “My life’s been saturated with writers and agents,” Ira said when I told him that I had started working on a novel. “You’re one of us now,” he whispered.

By 2010, I decided to spend some time writing in Greece. I had open accounts to settle there—family, friends, closets. What I hadn’t planned though was that it’s hard to settle with the already bankrupt. I landed in a suicidal country itself deeply in the closet financially, morally, even sexually. With debt levels that Greece couldn’t support, the perfect drama was already unfolding. I saw Xenophobia in Xenios Zeus’ land, anger and apathy and the mundane escalated to the national level. The most beautiful starlet turned to porn and the country too in a way. I’d gone back to find a bigger mess than myself. I left Athens for my father’s sleepy village, looking to spend some time with him while writing my  novel in his yard and, hopefully, recover some of my birthright’s dignity, my safety net. Goes without saying, I wanted to see Nikos too.

He’d gone fat and quirky. He looked pushed and pulled, his hands abused by odd jobs over the past twenty years. His daughter never left Greece though she did move to Athens to work in a mall. A few beers in, I reminded Nikos what he told me in 1991.

He stopped laughing. “These days you’re not Greek enough ‘til you fuck a tourist up the ass.”

“But there are no tourists around anymore,” I said.

“You’re not Greek anymore. What’s in it for you?”

“A boss of mine called me a ‘proud fucker’ once. At the time I thought of you,” I said. “But now it looks like you’re just hate-fucking.”

“What the hell does that even mean?”

“Nikos, fucking or not, there’s no pride left here.”

He looked out at the Aegean.

“Did you hear what I just said?” I pressed.

“Do you have a villa in Mykonos?” Nikos asked.

“Do you own a yacht or something?”

“Then you’re not gay. You’re just a faggot.”

Ioannis Pappos is originally from Greece. For the last 15 years, he has been working in management consulting. He lives in New York and recently completed his first novel, Hotel Living.