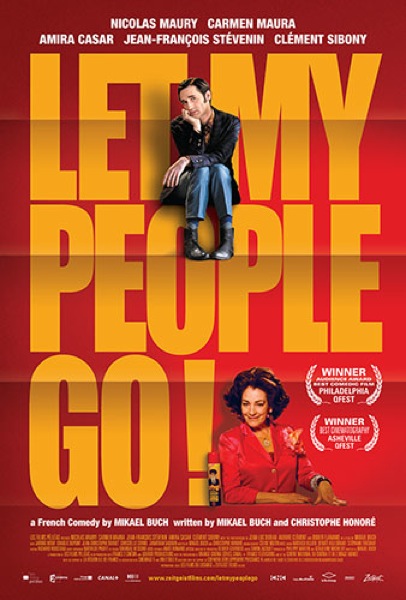 Hailing from a new wave of optimistic queer filmmakers, Mikael Buch gives us an outrageously hilarious gay comedy with Let My People Go! The tale of a young man who, after being given a bag filled with thousands of euros, is kicked out of his house by his sexy Finnish boyfriend and forced to move back in with his eccentric Jewish family in Paris.

Melting together an American sense of comedic timing and a European style of surrealistic family comedy, Buch successfully brings forth a slew of stereotypes (Gay, Jewish, Finnish, French, Etc…) while breaking international comedic boundaries. A film that is sure to leave you with a smile on your face and a possible guilt for avoiding those calls from Mom.

I spoke with Mikael on the film and his views on some of the issues that are facing Queer Europeans today.

Be sure to check out the New York premiere and Q&A with director Mikael Buch on Friday, January 11th (Repeat showing and Q&A Saturday, January 12th) at Quad Cinema.

First off I’d like to say that I loved how you chose to write comedic satire to tackle the issues of social acceptance and family obligation. How did you go about choosing comedy as your genre of choice?

Before ‘Let My People Go!”, I had directed a lot of short films and explored different genres, but comedy has always been the genre that fulfilled me the most. Billy Wilder says: “If you are going to tell the truth, you’d better be funny or they’ll kill you!”. I think comedy is a great way to explore real issues and to talk about the world that surrounds us in a liberated and joyful fashion.

Where did you draw inspiration for such a surreal but wide array of characters and was it difficult to cast?

All the characters are a mixture between childhood memories and pure imagination. I wanted all the characters to have a surreal touch but I also wanted all the relationships to feel real. I have always liked films that are able to express deep feelings creating a magical and “bigger than life” world. The casting process was quite long because it’s not easy to find actors that can be deliriously funny and moving at the same time. Carmen Maura and Nicolas Maury are exactly like that. They can make you laugh and cry in the same scene.

Is this an autobiographical film?

The setting is autobiographical in terms of identity but the characters are mostly fictional. I’m Jewish, I’m gay but I’m not Ruben. Nicolas Maury who plays Ruben has created a character that is halfway between him and me. That’s always what I expect from actors: to be able to make characters their own. I think it’s always great as an artist to use your life as a starting point because it’s always better to talk about what you know better, but once you’ve done that, you have to let your imagination take control.

The relationship between Ruben and his mother is very tumultuous, do you think it relates to being gay and/or jewish? French, Finnish, Jewish and Gay, stereotypes play a big part in this film.

I’m sure a lot of non-Jewish straight guys have a tumultuous relationship with their mothers! But stereotypes play a big role in how we live our family relationships. A Jewish mother has an image of what a “good” Jewish mother is supposed to be and she will often try to emulate that image. A gay son has also a stereotyped image of the kind of “good son” he is supposed to be. I think we all have to face the difference between who we are and who we are supposed to be. We are all, in one way or the other, influenced by stereotypes.

Do you think this film transcends the cultural line between the European and American film markets?

I definitely think so! I really see myself as a European filmmaker widely influenced by American cinema and I think the film is a good mixture of this two filmic cultures. The film is also full of Jewish and gay humor witch is something that can totally be enjoyed by an American audience. I’ve been in different festivals to present the film and the reaction of the American audience has been one of the most heartwarming!

For you, how important was showing sex and how was that related to the characters’ sexuality?

I often find that sexuality in movies has a moral weight attached to it that I don’t like at all. Most of the time, when I see a character having sex in a film, he looks like he is going to commit suicide in the next scene! I wanted to show sex as a simple and joyful part of life. I don’t think it’s specially related to the characters sexuality but maybe it’s even more important when we deal with gay sex because it has too often been depicted in a gloomy way.

With shifting political tides in France and gay marriage within reach, was this film’s release at all a political statement for you?

What’s political in my film is to show a gay character that is not only defined by his sexual preferences. I didn’t want to make a “coming out” movie but a film about a gay character that has to face universal issues. Movies have the power of creating empathy between every type of social groups. If a straight person is moved by the story of Ruben, then I’ll think I have done a good job! In France, we are now having the same kind of debates a lot of American states have had and the homophobic reactions of some politicians made me realize how hatred ideas are still here, maybe more than never.

How difficult was it to get an LGBT-themed feature made in Europe?

It wouldn’t be accurate to say it’s difficult to get an LGBT-themed feature made in Europe. A lot of LGBT films are made but most of them show homosexuality as a ‘social’ issue. Those films always show gay people having a hard time being themselves and I think some people are reassured when they see unhappy LGBT people in films because it confirms their vision of homosexuality as a ‘problem’. I belong to a generation that wants to say “We are gay, we are young, we are happy with who we are and we don’t want to be portrayed as victims all the time”. Of course, being gay is not a bed of roses everywhere but we don’t need anyone’s pity. All we need is empathy and understanding.

How was the film received in France vs. other countries?

The film has generally been well received. I feel very lucky to have the opportunity to share my film with different audiences around the world and to see that the spirit of the film works everywhere.

What feeling do you hope the audience leaves with?

I really wanted to make a feel good movie that would be liberating for the audience. I hope the film will give to the audience a little bit of courage to be more like the person they really want to be. Cinema has the power of making people braver and more daring and that’s an amazing thing!

What’s next for you as a gay filmmaker?

As a gay filmmaker I am collaborating on a campaign to prevent AIDS and to remind young people to use condoms. I’m also writing my new feature film but I won’t give any details on that because I am little bit superstitious! I’ll keep you posted!