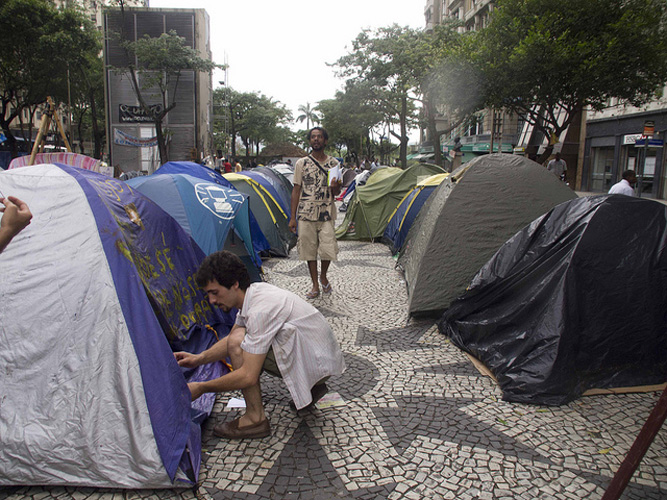 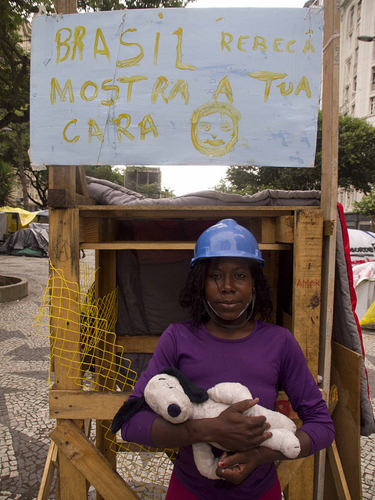 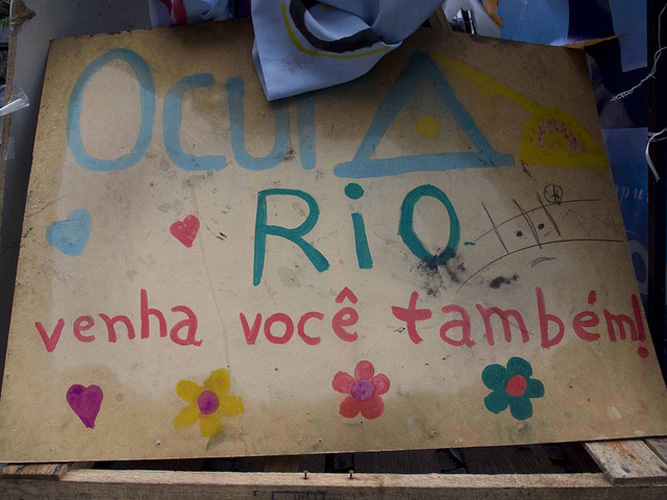 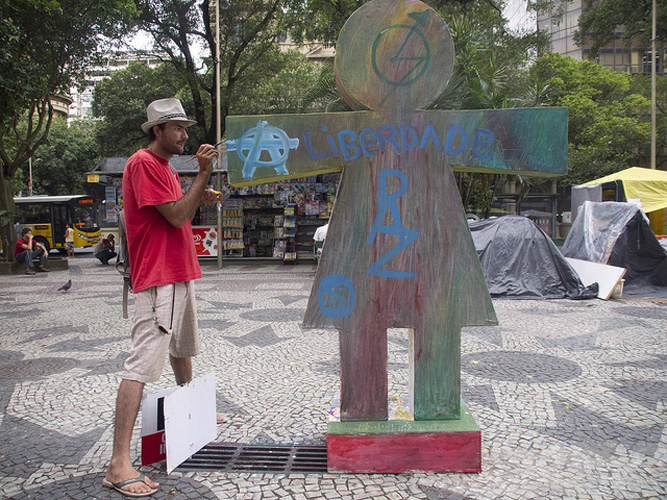 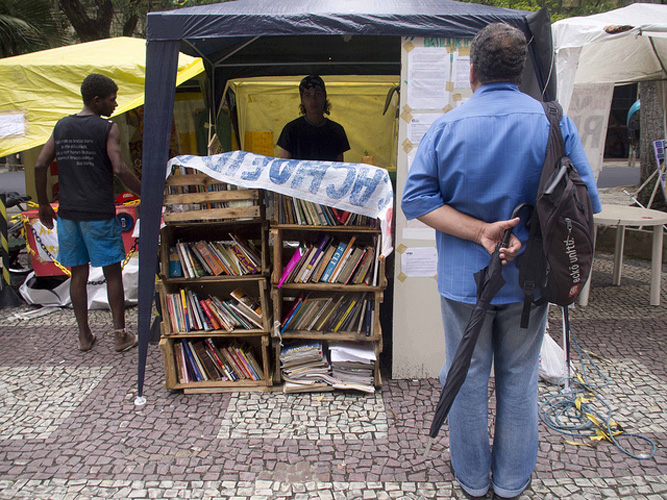 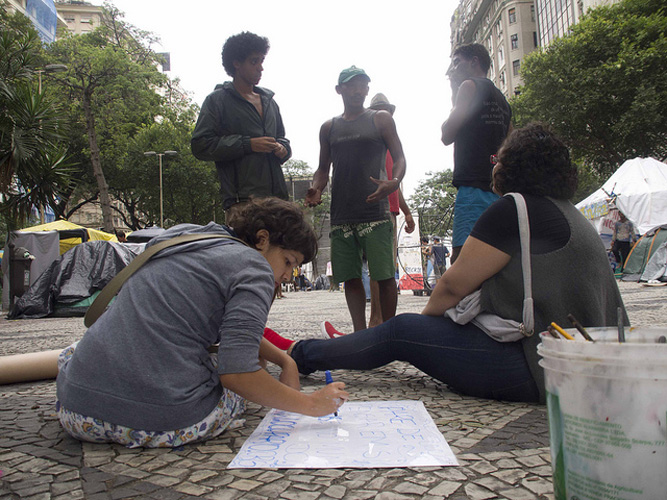 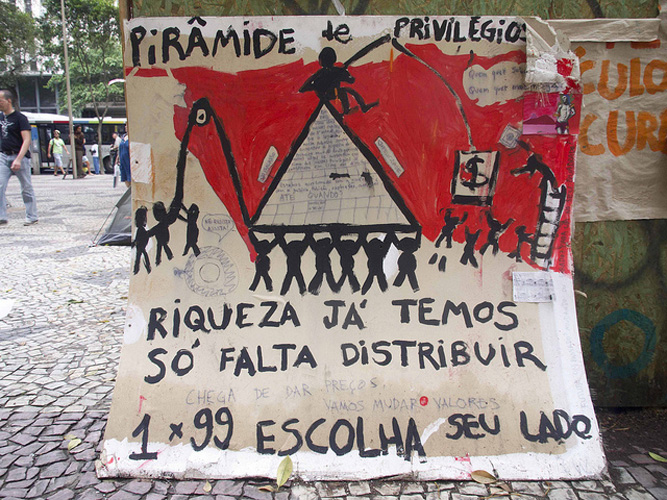 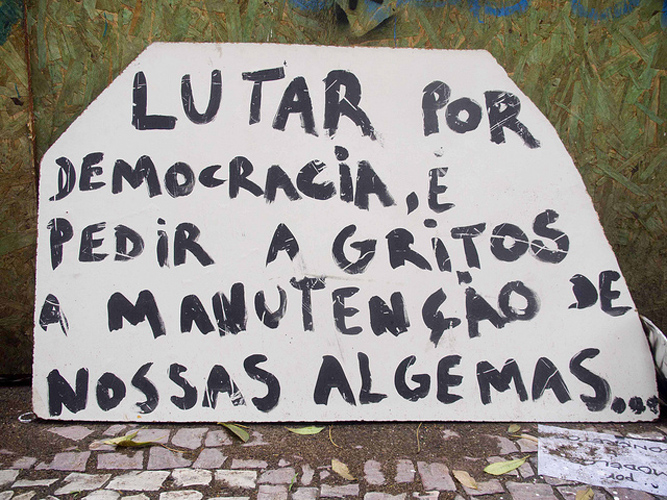 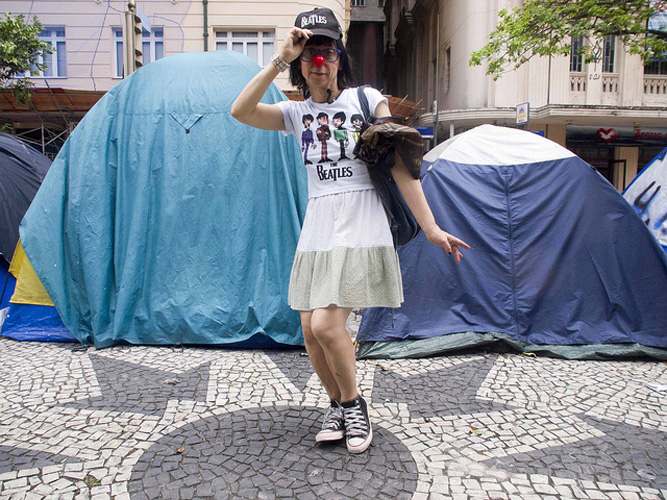 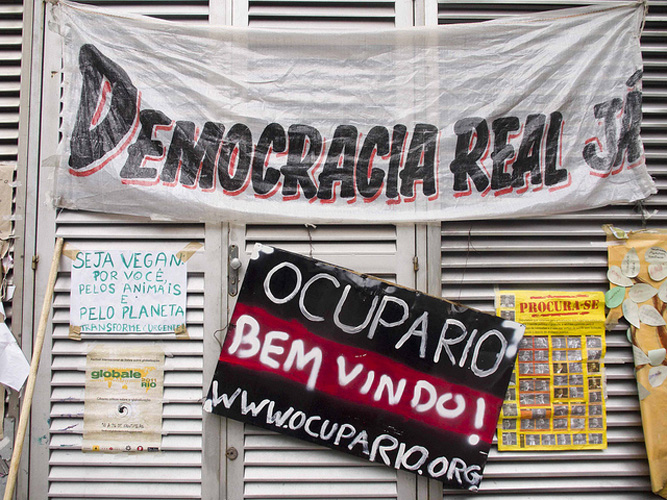 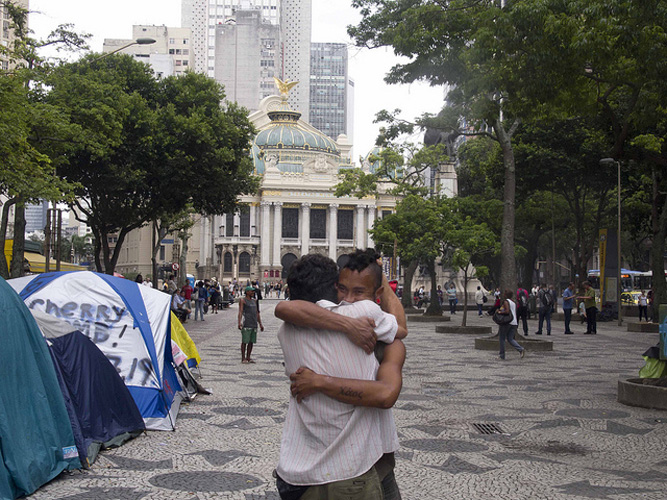 “Isn’t Brazil always occupied???” That was the one line first response to these photos that I got from my friend Chris. My response was a line from a poem by Ani DiFranco titled Self Evident where she’s talking about the USA: “Cause take away our Playstations and we are a third world nation.”

I’m in Rio because last week I was production managing for Trajal Harrell’s 20 Looks Or Paris Is Burning at the Judson Church(s) at the Panorama Performance Festival. I was supposed to leave tomorrow but I cancelled my return flight to stay here and continue to help any way that I can at Cinelândia Square which is where the OCUPA RIO! Movement has set up shop. I especially feel obligated to stay because there is a complete and total local media black out here. (Thanks for publishing this!) And as soon as I can find the means, I’ll make my way over to São Paulo to see how things work there.

I was on Skype the other day with a friend of mine who I have this very Who’s Afraid Of Virginia Woolf? like relationship with. We had not spoken for a very long time and I was telling her about my experience here on the beach: “I’m a bit overwhelmed. The bodies! They’re everywhere!” To which she replied with the question: “You killed them all?”

Later that evening I was back down on the streets of Ipanema hanging out late night with the cruisers and the hookers. I find this time and space to be much more interesting than anything that the cheesy discos or gay clubs here are putting out. One of the boys that came up to me became so hysterical when I told him that I didn’t have any money to give him for sex that he began waving his arms back and forth and stuttering in Portuguese, even though he knew I could only speak English. Looking into his eyes at that moment, life felt like the end of Mulholland Drive when Diane Selwyn’s rotting corpse, (or whoever), is discovered. Or the feeling I get when I look at that photo meme of Princess Beatrice’s Royal Wedding hat photoshopped on Obama, Clinton and the others while they’re watching Osama Bin Laden’s execution in front of a television. I understood then a little more what my friend was provoking earlier on Skype when she asked me if “you killed them all?”

Anyway, yes, Brazil is always occupied. It’s true. Which just makes organizing a way to get the 99.9% here to peacefully organize, mobilize, rise up and get what’s theirs all the more wonderful in terms of human potential. (The town just erupted into loud thunderous screaming in response to a soccer play as soon as I finished that sentence.) I’m going to end this here.

Michael Hart is an angry, bitter, gay, disillusioned, disenfranchised, psychotic, left winged almost radical who was born in New Orleans, Louisiana and raised in a suburb of Fort Worth, Texas. He uses photography as an excuse to travel and make ends meet and now lives between both NYC and Barcelona, Spain although now he's in Rio De Janeiro, Brasil. Selected print publications that Michael has contributed his photography to include, but are not limited to: Artforum, Contact Quarterly, Issues In Science and Technology, The Juilliard Journal, The Movement Research Performance Journal, The New York Times, Paper: The New Museum, and The Village Voice. To see more, visit www.hartharthart.com