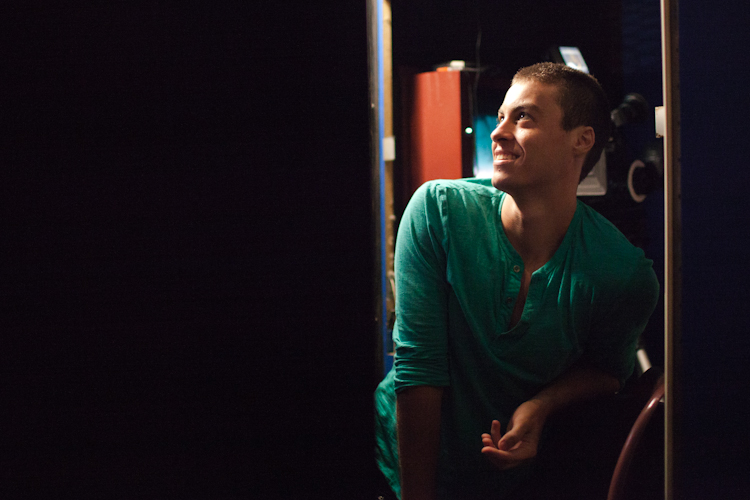 It’s the first morning I wish I had more time to write, because a lot of days have passed, and a lot of moments that I’d like to get down to remember. But I have to be at set in 25 minutes—El Faro, the old Spanish place in the West Village—to review the “crack” scenes, which were from our second day and, thus, have scratches. Did I mention that the first four days of the shoot we had a faulty camera and there are intermittent scratches on all the footage? Intermittent being the operative word. Lucas and I are trying to figure out whether to do a re-shoot or not on Friday, our day off. A hard rock to push up the hill because, at least for me, my own tiredness craves that day to myself. This is always an issue in directing: when to push, when to lay back. You have to constantly assess. One of the hardest moments on set is “one more time.”

Friday we shot on three locations: Julius Bar, the Blue Store (adult video) on 8th Avenue and the Inn at Irving Place, which substituted for a hotel room in Berlin. Three scenes, three locations, three company moves. Miguel Del Toro was on his second day after having “met” Erik the day before at Eastern Bloc in the East Village. Miguel just finished his freshman year at Kenyon College and came to New York for the summer; he came to one of our extras casting sessions at the Gay Community Center (in the same room where I did my auditions for Vaudeville, my first film, back in 1989), and we all were startled by first his good looks, then his charm, then his confidence. We cast him as Igor, the part based on Boris.

Too much to say today. After 14 hours on Friday, I walked out of the Inn at Irving Plaza and down the stoop to the street. “Ira,” someone calls out, and sitting in the patio of Pure Foods is my ex, on a date. I called out “Oh My God,” and then we said hello. He was very nice. I was deliriously tired and I think actually said, “Nice to meet you.”

Mostly, though, the movie life takes over. There’s a movie starting to form. It has its own history, the characters have their own relationships. These characters take on the actuality of flesh and experience.

Tip of the day: if a scene isn’t working, it might be the acting, certainly, but more likely it’s the blocking, or the lack of actions for the actors, or a bad camera placement, or the wrong lens.  If a scene is dead, or the actors stiff, let it loose a little and change things up. Don’t let the actors just follow their (your) marks. And try a new lens.