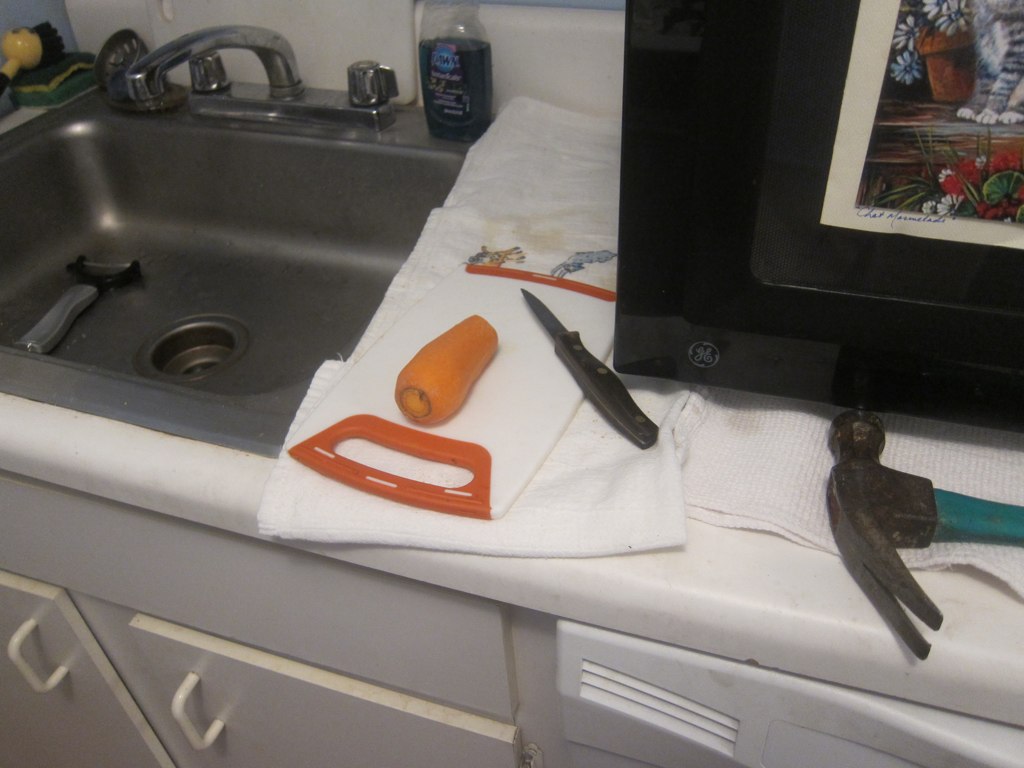 the carrot, an integral prop.

I forgot how totally grueling it is to direct a film—maybe this one more than others, because of the intensity of the material, though in truth, the little throwaway scenes in a movie are actually the hardest to shoot and probably should be literally thrown away. Which is why they are hard to shoot. Last night, we were at Sue Simon’s house, shooting the “Ken” scenes, one of the pick-ups. She mistakenly thought we were shooting a party scene until I arrived on set with three carrots and explained they were props for a blowjob. By 11:30pm when the neighbors start complaining about the loud, raunchy language coming from Sue’s apartment, I’m reminded how much of directing is maintaining the balance between the present and the future, between the owner of the house looking at you with hopeful eyes that you are nearly done (as she offers you, kindly, another homemade brownie she baked for the crew) and the fact that you really want one more shot, one more take, one more “suck it’ said loudly. Mostly what I do is try to be considerate and not an asshole, while constantly thinking of the film first. What the film needs or might need.

Though in this one, I’m also following a certain motto, which is “imperfection.” In my attempt not to be uptight and to loosen up in my work a little more than I have in the past, it’s my goal to be accepting, while still pushing. When a shot or a scene looks like it might just be average, not exceptional (or not as good as in the work of my heroes—talk about anxiety of influence), I remind myself that I wasn’t an experienced or a great filmmaker when I made The Delta and that worked out OK.

The scene at the Film Forum was a bitch. Again, I keep arriving at moments of shooting and going, “Oh yeah, I remember how hard this can be.” Though I seem not to remember until the moment I’m there. In this case, it was 40 extras and blocking that in life looks simple, but to film becomes very hard: Erik crosses the street (Houston) to meet Paul for a date, they chat in line, the line moves and they go inside. But much of directing is actually blocking—mechanics—and in this case, figuring out when the line should start moving and how to work with the extras (who were great, but sometimes, when placed badly, look mighty close to “extras”)—a good trick is to use a longer lens so all the background starts to blur and you aren’t focused on them. And the crossing of Houston at 4am in the morning means waiting for the lights on 6th Avenue and waiting for the passing of the trucks as the morning starts to arrive.

And then on top of it, you have the acting, and this wasn’t an easy scene for Thure and Zach. They have to get from happy-to-see-each-other to have-their-first-fight while waiting in line, crossing Houston, stepping over ropes, dealing with 40 extras…

And we were doing the whole scene in one shot so it was either going to work or not. For 20 takes it didn’t really work: It wasn’t good. The pressure is on, the sky is getting less-than-black, the morning is coming, the extras are tired. I felt the pressure. Take 21 was excellent. I smiled. My comrade and script supervisor Veronica laughs. We got it.

And then, when wrapped, Lucas tells me there is a scratch on day three’s negative.

I walk home through Washington Square Park in the early morning feeling deflated, exhausted, beat. I get home and call Boris. I want to wake him up. He’s loving. I sleep.