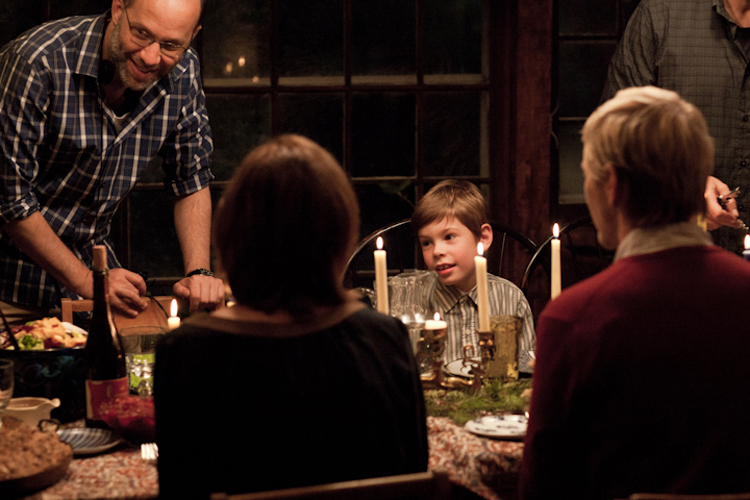 Sunny and green when I wake up, after finishing, early, at 2:30am last night. I never like finishing early because it means we could have shot something else, or something for a little longer. It feels like a waste of hours and having these five weeks of opportunity only to shoot the images of the film. But it’s fine to finish early once in awhile and everyday does not have to be a rush to the finish line. Last night was Christmas, in August. Shooting a holiday dinner at the country house. For the first time, all the supporting players are together in one scene and together with each other for the first time as well. They work very well together and it was easy to find the sense of a group. I felt like the movie was well cast, that these were a group of individuals who also make sense as a group of friends.

Early on, we shoot a scene where Claire tells Erik that someone has died, which was set in the script indoors, but I had moved outdoors the day before to allow for the Art Department to set up Christmas earlier. I arrive to set and I realize that it’s better inside—that it’s a location we haven’t seen and we need to know its interior—so another moment of backtracking. The crew have ears and quickly the leisurely pace changes and there’s a commotion as Christmas is taken down and summer is restored. The scene is going to be shot at dusk, the blue hour, so we wait around. People chat and sit on the grass and eat pretzels and BBQ, and then suddenly, the light is right and we have half an hour to shoot a very difficult scene. We’ve blocked the first shot as a dolly in from the front door—I keep making references to the last shot of The Searchers, but no one knows what I’m talking about (pretentious old man?)—and a shot on Thure, and then we need to turn around and do a shot on Julianne. Before the light goes. It’s hard, the scene involves a lot of emotion and some possible tears, and people keep saying loudly, “We’re running out of time.” I ask them to stop saying that. It certainly doesn’t help the actors. We got a good scene, I think.

The Christmas dinner party later works well. There’s a kid, Shane, who suddenly at midnight becomes an animated clown. We re-do his single and he gets an ovation for his close-up. The trick about most scenes in the movie is if you set them up well, if you bring in the right actors and have the right location and the right props, then you turn on the camera and you let it play, something will happen. If there’s one thing I’ve learned in the years between making movies and in teaching as well, it’s that a film is made up of a series of events. Not a series of plot points or dialogue. Something has to happen and the camera has to record it. If nothing comes to life in front of the camera, it’s hard—at least for me—to make something I’m excited about later. Create the event (thank you, costume designer Liz Vastola and production designer Amy Wiliams) and then shoot it well (thank you, Thimios, “the Greek”).

And at three in the morning, or four, I vaguely remember the sound of heavy bass from the room above me and the sound of people laughing, as if it were a sound effect. A second, third night of partying for the crew. Two nights ago, there was a bonfire out behind the motel, and swimming, and even a policeman arriving and asking us politely to keep it down. At one point, sitting around the fire, J.D. and John, one who loads the film and one who holds the boom—literally the two quietest guys on set—pull out their guitars and start to sing. It’s a powerful moment. They are good. I think of Day for Night. Everyone has their own story.