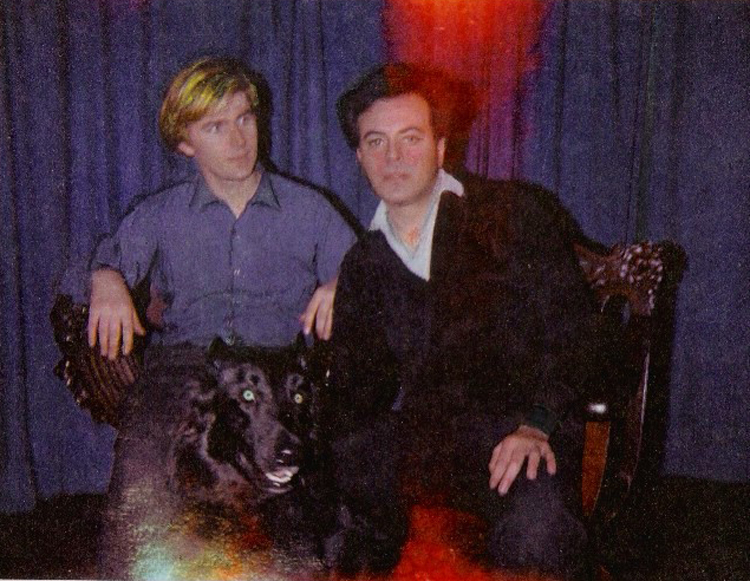 I had first seen Robin, gloriously all in white, leading an anti-capital punishment protest march he had organized in the spring of 1960 with Elaine de Kooning and the great American Socialist and pacifist David McReynolds. But it was to be a few months before I was introduced to him when our mutual friend Bertha Harris brought me to a party at his West Side apartment. He was living unhappily with his lover and Bertha thought, with his being a professional poetry reader, he should have a living poet of his own. Robin insisted that as he said goodbye to me on the landing outside his place, I firmly rubbed my finger along his clothed cock (but I never had a memory of this). In any case, we were soon beginning a torrid affair.

Bertha was a novelist and her first book, a roman-à-clef, featured my dark-haired Robin as a chief character, his only disguise was bleached-blond hair (which always annoyed him). Bertha went on to write The Joys of Lesbian Sex–and to die too young of too much drink.

In that period before the Internet age, when I came to New York in the late 50s and 60s, bars were the main place to connect. Except for popping into the venerable Julius’s, my first lover Parker and I usually went to the bohemian artists’ bars like the Cedar Tavern in University Place and the more mixed Dillon’s up the way, where there were more Lesbians. I should also mention the dancing hideaways in dismal cavernous rooms downtown or the few secretive Lesbian hangouts. When we went into them, there always were a few enormous bull-dykes with cropped hair and the muscles of truck drivers who looked as if they were about to pick you up and whirl you out the door if you dared to be a Bi after their girls. It was all one happy or contentious queer family then, before the 70s brought in the rabid quest for instant pleasure that gave us our separate bars. But when the plague came, our Lesbian sisters, instead of saying Fuck You! as we deserved, pitched in with action and care. But many queers had become real alcoholics like Bertha—one later lover of Parker’s froze to death one night on a winter street, too drunk to get up to head home to shelter. As with so many of our friends earlier, AIDS took Parker himself and his last lover, one by one, just a few months before the saving medicines came in.

Robin, though a Shakespearian actor in the English tradition, had acted with the early Living Theatre and lived with Judith Malina and Julian Beck for some time. They also joined together in political protests around the city. People assumed that Robin and Julian were lovers, but it was Judith whom Robin sometimes made out with, purely as an acting exercise, as it was always implied that queers couldn’t play love scenes. Many of his women friends were attracted to him but he never slept with any. I was bi-sexual in my youth but was beginning to see the error of my ways when I met Robin and never had sex with a woman after I was 23. I think the last girl actually I had sex with was on the floor of my little studio. As we rested afterwards she noticed a book on the bottom shelf of my bookcase where I kept my gay ones—I think it was called Sam but I have no recollection of what it is about. “Oh,” she said, “my friend so-and-so has that book.” At that moment, I took it as a sign that I shouldn’t and wouldn’t be fooling anyone anymore.

Robin, who was far handsomer than I, had a great deal of trouble in his youth being pestered by older men, even those in the pacifist movement whom he might admire but who had no appeal to him sexually at all. Bayard Rustin, who didn’t receive the attention his genius for organizing deserved, had been held down by the F.B.I’s Hoover who made sure that if he weren’t kept in the background of the civil rights movement he would be outed for his former Communism and arrest for homosexual acts in public. Often he too was aggressively after Robin at parties, as was the future head of the War Resisters’ League, the radical printer Igal Rodenko. I remember once how, when I was working at the New York Public Library, Igal and I shocked everyone by kissing on the lips on Mrs. Astor’s enormous rug in the Trustees Room—what brought us to that unlikely spot was the gift to the Library of the archives of the Spanish Civil War Lincoln Brigade.

Robin and I did know a few long-time queer couples early on. The international literary scholar Marius Bewley, a professor at the Catholic Fordham University, had a house on Staten Island with his lover Gary, an illustrator fond of inserting penises into the trees and decorative designs in his children’s books, to subliminally recruit children, I suppose, as the hets like to accuse us, but they only were discernible to his perverted friends. One night Robin gave in to their persistence by fucking them both, but he told them never again and they managed to become friends. Then there was W. H. Auden and Chester Kallman and their long and somewhat unhappy life together, at least part of the year. Once, Robin, who greatly admired Auden and often read his work in public, was horribly embarrassed when Chester made continuous passes at him in Auden’s presence after one of Robin’s readings at the National Arts Club. Auden himself led us into his own queer world with the underground publication (now easily available) of his encounter with a hustler called The Platonic Blow. When Robin was living in California, he met the painter and writer on Mozart Michael O’Shaughnessy and just turning 15 allowed himself to be blown in his car—once, but they became life-long friends. Michael under his real name which I’ve forgotten was also a Broadway designer. When I knew him and his artist lover Gary, they never seemed to work. They simply rented several apartments and decorated them with elegant furnishings and then at a great profit sold the contents and the Key, as it was called, to people who wanted a rent-controlled apartment. Or they would follow the seasons to resorts like Martha’s Vineyard and sell their paintings by the dock (the soprano Beverly Sills, honorary New Englander that she was, took a fancy to their work). John Cage and Merce Cunningham were the best example of a couple who built their lives together in the arts. Each successful in his own field, they were also able to collaborate with each other. We knew Cage through Robin’s friend the pianist Grete Sultan who played his music so beautifully—and Bach’s! We would sometimes go upstate to Haverstraw to the artists’ colony where Cage had his bare almost Japanese house and he would take us into the woods in a hunt for edible mushrooms—to me a form of Russian Roulette. James Merrill seemed to have that sort of relationship with his lover of many years David Jackson, but in the end he had a younger lover, not a unique phenomenon in the gay or straight world. But in their spacious apartment overlooking Central Park the actor Sandy Campbell continued to live the good life with Tennessee Williams’s friend the novelist Donald Windham. Robin and Sandy had played the same small Williams part in Streetcar, the Young Collector, Sandy as a replacement in the original production and Robin in the first revival in summer stock. Despite being known for their solidity, our Lesbian friends fared less well. Bertha married and had a child between her many lovers. Even though they were comfortably ensconced in Sutton Place, Robin’s old friend the heiress and wonderful Broadway actress Margaret Barker, her career almost ruined by drunkenness too, finally broke up with her photographer lover Hally Erskine (how Lesbians loved to introduce her as Mrs Erskine). Robin’s mentor Eva Le Gallienne, the great English actress in New York and daughter of Wilde’s friend Richard, after many major affairs finally settled down with an actress in her troupe. The poet and radical philosopher Paul Goodman was a different sort of story. Once when we were trying to persuade him to give us a poem for a new magazine, and with his long-suffering wife still about, Goodman made his latest literary trick display his stupendous cock for us.

Check back for part two next week!

William Leo Coakley has published in the Paris Review, the London Magazine, the Nation, the New American Review, Poetry Review (London), Quarterly Review of Literature, Christopher Street, and numerous other magazines, newspapers, and anthologies in America, England, Ireland, and Mexico. Since appearing in the Discovery series at the Poetry Center in New York, he has read his poems at colleges and pubs, in the Day without Art programs, and on television and radio. His poem “Horses Burning” won a Duncan Lawrie Prize in the l982 Sotheby’s International Poetry Competition and appeared in England in the competition anthology, edited by Gwendolyn Brooks, Basil Bunting, and Sir Stephen Spender, in 1984. Born in Boston but now an American and an Irish citizen, William Leo Coakley has lived in London, in Rome, and in New York, where he has been publisher of Helikon Press, founded with his late partner Robin Prising. He was Managing Editor of New York Public Library Publications, publishers of many fine editions of Auden, Sean O’Casey, Whitman, Wilde, and Virginia Woolf.