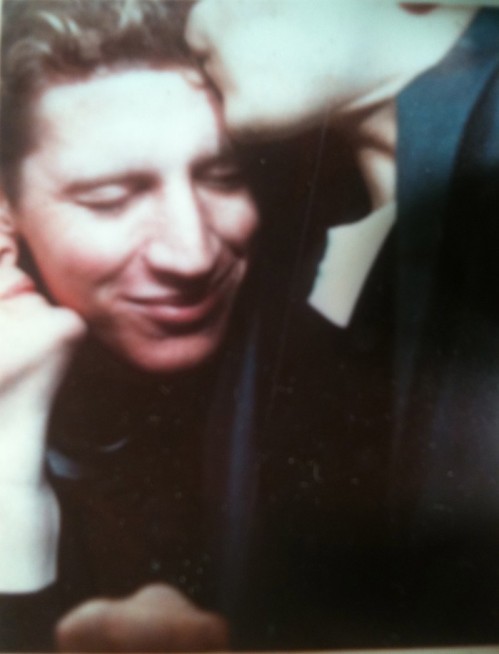 We used to leave our keys with the Pink Teacup, just under the Coconut Cream Pie, in case friends needed to get in. You could also call from a payphone and we would lower the keys down on a string. This was 42 Grove Street and we had all moved there in 1992—fags and dykes and in-betweeners—and there were four of us in a two-level apartment with a spiral staircase and mice. We came with our ACT-UP t-shirts and Doc Martens and we sneered at Gay Pride, though we marched in it. We wanted to be part of gay history. The West Village still had a lingering sense of the ’70s and early ’80s, not only in the Boots and Saddles-type bars and the sex clubs on Hudson where once bathhouses had stood, the dirty leather-and-denim odor that is utterly gone from the Village now, but in the cheap eats and diners we would frequent, and the heroin that loomed everywhere. Of course we had no money. Of course we had no love.

On the night of the election, a few of us went to an Erasure concert, got completely stoned, and came out to the news that Bill Clinton was to be our new president. We were ecstatic; our youth had been nothing but Reagan and Bush and marching for more funding for AIDS research. We decided we should sleep with some Republicans, so we headed to the Townhouse uptown. It was so strange, as I remember, to meet at last a crowd of older men; we seemed so weird and silly to them, men whose all-male crowds had been decimated only years before. We had yet to lose anyone we loved. They found it odd that we went to dyke bars like Henrietta Hudson’s or Cubbyhole to meet boyfriends, on the theory that nice boys have lesbian friends. They found it odd we wanted “boyfriends.” They were amused at our temp worker jobs. I think they were not charmed. But we were very young, and high as kites, and must have been adorable enough. One left his belt at my place, and I have it still. My husband wears it, and always forgets where I got it.

Our straight friends lived in the East Village, in larger, filthier apartments. We could not afford cabs, so I have many visions of watching my feet as I stumbled back and forth drunk along Eighth Street. One friend planned the after-parties for Saturday Night Live, and it was only there we felt glamorous and New York, in a booth at Gotham preening under chandeliers. But mostly we could not afford a cocktail, or a dinner. Steamed buns on 23rd were 50 cents each and that was lunch. Even the Coconut Cream Pie at the Pink Teacup was a dollar more than felt right. You could take a boy to Mappamundo on Eighth for under $20, and the next day you would wait in the summer-hot living room, littered with cigarettes, waiting for a message on your answering machine. We never left the city. We never left Manhattan. We never left the Village, not until each of us, one by one, decided life was elsewhere—mostly Los Angeles or San Francisco—and then we left for good.

Pictured above: “It was a photo booth picture out on Coney Island when a bunch of us took the F train to the end to see what was out there! There’s something about the photo that is so sweet to me, with my friends Jen and Ryan kissing me with my eyes closed. Twenty one years old!”

Andrew Sean Greer is an award-winning novelist and short story writer. His novels include The Confessions of Max Tivoli (2004) and The Story of a Marriage (2008). He is currently working on a new novel set in the West Village in 1985, 1941 and 1918. He now lives in San Francisco.