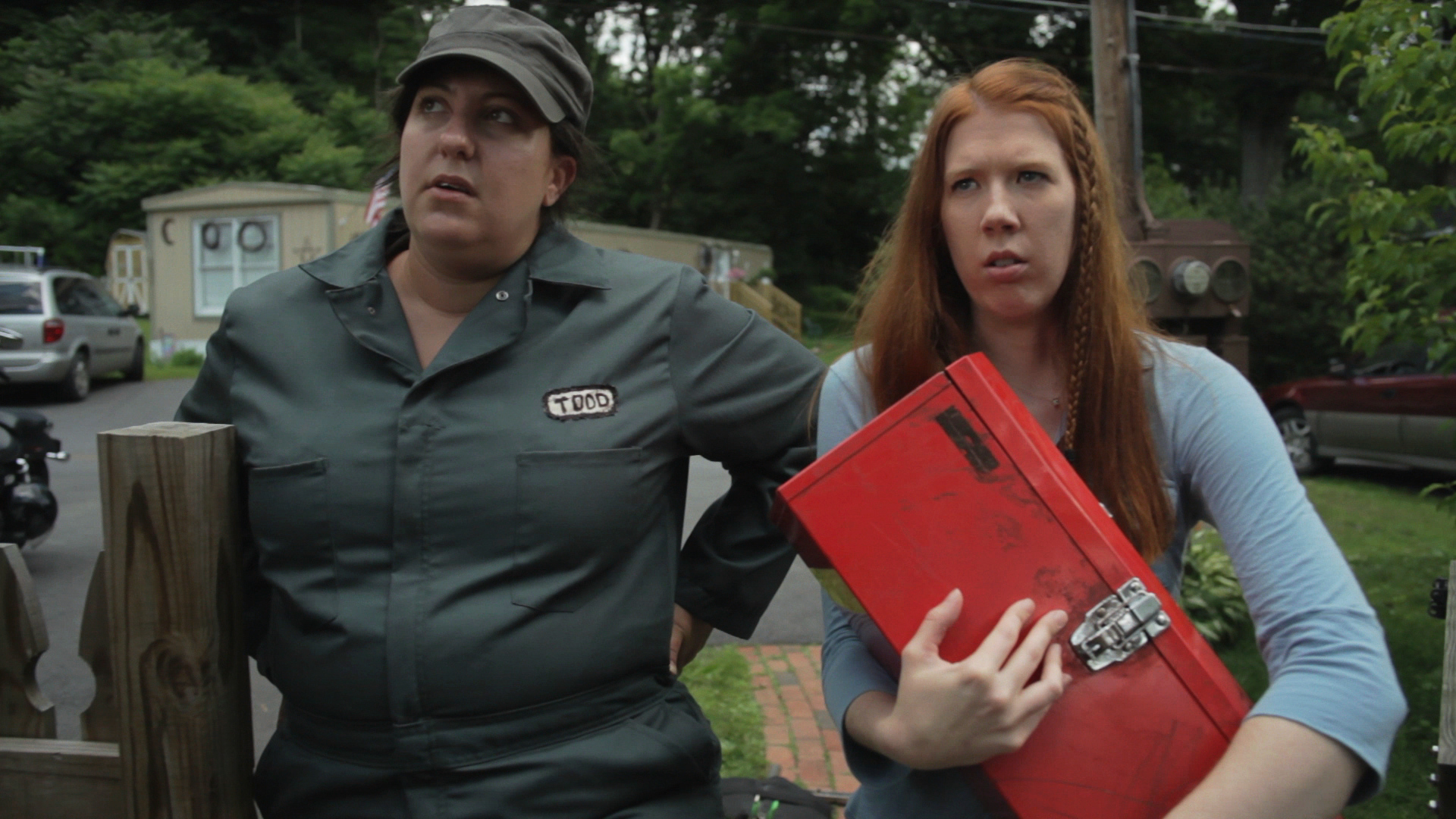 Karen (Rachel Style) is a bored refrigerator repair receptionist stuck at work on the Fourth of July. However, her day gets a lot more eventful when a call comes in from her long-lost father (Hunt Block). Enlisting her janitor friend Meagan (Ashlie Atkinson) to help, Karen investigates her father’s trailer park home. She stumbles across a half-sister (Jo Armeniox) addicted to betting, a half-brother (Robert Salerno) tortured by grade school bullies, a sketchy but charming buddy (Harris Doran) “just sleeping on the couch” and a potential lover (Raúl Castillo) in jail. Meanwhile, Meagan must decide between the stability of her longtime girlfriend and the thrill of a new love. With a small town like this, Karen’s own journey sets in motion a crazy chain of events that will change not just her but this one small town forever.

My Best Day premiered at Sundance Film Festival 2012 to a sold out audience, and the buzz surrounding the film – and Ms. Greenwell – is still going strong.

KTLO: When did you decide you wanted to be a filmmaker?

Greenwell: I went to Tisch School of the Arts for Dramatic Writing. Upon graduating, there was so much access to gear because of the “digital revolution” that I started self-producing my own shorts, editing and shooting with and for friends. This led to me directing my own features.

KTLO: In addition to making your own films, you’re also an established editor. Do you gravitate more towards writing, directing, or editing?

Greenwell: I write what I direct so those are one in the same. I go through phases. It takes so much stamina and vision to create community around a production and I love that focus. Other times I want to be the person to reinterpret and support as the editor. The challenge that I love to both editing and directing is keeping all creative departments cohesive to story and tone.

KTLO: You’ve worked in all kinds of productions, from shorts to features, documentaries and industrials. What has been your favorite so far?

Greenwell: Since I started out in screenwriting, I like them all equally as long as there is storytelling involved and problem solving in creating dramatic structure around characters. If something is all style and no substance, I tend not to be attracted to it.

KTLO: How is MY BEST DAY different or similar from your previous movies?

Greenwell: I collaborated more with my DP [director of photography] to let the story be told through the camera instead of relying on dialogue and editing to control pacing. All my movies are similar in that I like naturalistic casting, my characters are often from smaller towns and working class and I enjoy simple plots.

Greenwell: I think movies are traditionally meant as a release from the mundane. It’s a visual medium and a recreation of internal dreams so who wants to see something everyday on the big screen? I don’t think this is changing much because reality TV forces dramatic conflict through oppositional casting and a lot of the “non actors” are in it to become famous. I am inspired by stories where characters are less than noble or struggling because sitting with that “pain” is more important to me than aspiring through the fantasy of a blockbuster.

KTLO: All of your characters have unique quirks that make them funny yet relatable at the same time. What or who inspired their creation?

Greenwell: Typically a character comes out of an action I observe in real life that makes someone unique. Sometimes I change the motivation for the action completely. For example, when my family was broke, my mom swatted a fly into a tea canister and tried to return it for money. I instead gave that action to a socially awkward preteen in my movie who wants an excuse to ask the cashier out on a date.

KTLO: The film contains gay and lesbian characters, yet I would not consider it a specifically “gay” film, but rather more of an ensemble comedy. I have seem some reviewers agree, some call it a queer film, etc. Where do you think the lack of consensus on this point comes from? Do you think the labels themselves are changing and/or becoming outdated?

Greenwell: Sundance described the movie as “both subversive and sunny.”  Sunny because it is a comedy. Subversive because gay and lesbian characters are placed so plainly that it’s a non-issue to see them in this rural town. To me, this was the ultimate compliment because I have always wanted the space to be both out as a lesbian and share personal stories to a wider audience through comedy.  More LGBT filmmakers are getting their films out and that diversity of stories is broadening the expectation of what is “queer.”

KTLO: My Best Day deals a lot with themes of identity and choosing one’s own fate, but also seems to accept the fact that sometimes, you just can’t change where you come from. In the end, Karen seems to find her own happy medium. What message do you hope viewers take away from the film?

Greenwell: When people come up to me and share their own crossroad moments in life after a screening; that means the world to me. I want people to walk with their own epiphanies about their journeys.

KTLO: What’s next for My Best Day and for you?

Greenwell: We’re enjoying My Best Day’s ride on the festival circuit. I am
currently writing a drama about the butch/femme lesbian bar scene in
Buffalo, NY during the 1950s.