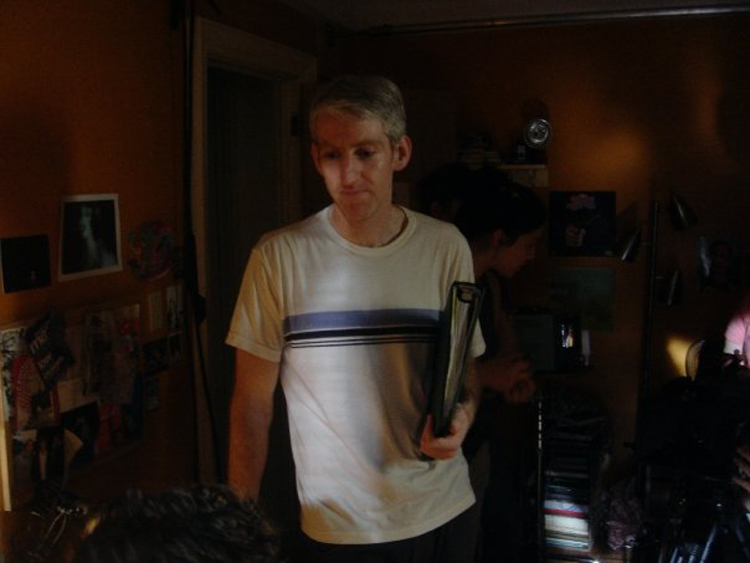 On the night of September 10th, 2001, I placed a roommate ad on the Village Voice website for my 2BR share in the West Village. The next morning I woke up to emergency sirens and witnessed the attack on the World Trade Center from my bedroom window. After a harrowing day, I left my apartment to stay at my boyfriend’s place in Brooklyn. Then, a few days later when I called my machine (remember doing that?) to get messages, there were a number of people who had called asking about my roommate ad. Some people even called me the day after 9/11, casually asking if they could “stop by and see the place.”

This was the strange but true story that was the inspiration for my first full-length play and later feature film, WTC View. It tells the story of a man who, like myself, placed a roommate ad for his apartment on September 10th. Because of this fact, people often mistake the play for being autobiographical. This is a situation that I’m somewhat familiar with because it’s happened before with other works of fiction and films I have written. In some ways, I find this flattering because I think it means people find the story so believable and real that it must be true. However, I also find it somewhat annoying because it assumes I just write down everything that happens to me and that there is little imagination involved in my writing. Still, the burning question remains…is it true or not? Is this the story of your life? Well, here’s my attempt at an answer.

Every writer has his own process. For me, that process has always started with my life. I usually start writing something with an incident or event that has happened to me as a sort of jumping-off point to a longer, fictional piece of work. My first film that got released, a short called Pool Days that started the Boys Life series, was about a 16 year-old getting his first summer job as a health club lifeguard. Naturally, my first summer job was as a lifeguard for Holiday Spa in suburban Maryland. Yet my first summer of work was not nearly as eventful as the one in the film, where the main character has to deal with the advances of a female aerobics instructor and a male club member. The question of that film’s autobiographical nature often came up in interviews and Q&As and my jokey response was that if this was a true story, I would never have become a writer. As with all jokes, there is a good bit of truth to that statement.

I have always felt that my life was never as exciting as I wanted it to be. And, because of this, I was always making up stories that were more interesting. When I was a kid as young as 7, one of my babysitters marveled at how I would just start spinning these little narratives out of nowhere. As I grew older and became a writer, I found that with this easy ability to just make things up, I could take the “boring” circumstances of my own existence and make them a little bit more interesting. So I did this with my short stories, short films, features and even a couple novels.

In the case of WTC View however, the story behind the story is a bit more complicated. There was certainly no need to make events of 9/11 more exciting. Living through that uniquely awful day New York City was not something that needed much writerly embellishment. (In fact, the experience actually felt like a warped screenwriter’s version of a Hollywood disaster movie, with the unfortunate omission of the “hero” character.) In the weeks after, I remember thinking that I couldn’t really see myself writing something like a book or play or film about 9/11. It seemed too big, too impossible, too daunting, and for me, literally too close to home. However, I kept running into friends and colleagues who were constantly saying just the opposite; that this was something I “should” write about. In fact, some people insisted I had to write about it; that it was my duty as a writer who had lived through this historical event. I, however, felt the exact opposite. As any writer knows, writing about a subject means living with that subject until the project is done which often takes years. And that is not something I had any interest in doing regarding 9/11. I wanted the trauma and terror of September 2001 to fade into the past as quickly as possible.

However, in March of 2002, on the six-month anniversary of the attack, I came to realization that ignoring all this stuff was not going to make it go away. That night, I watched the Gaudet Brothers documentary 9/11 on CBS and it transported me back to that day and its aftermath. It started a flood of memories that were emotional, intense and simply could not be ignored. It was at that point that I realized that maybe getting these feelings out of my system might be therapeutic for me and that there might be some use in telling my unique story in the same way the Gaudet Brothers had told theirs. I had lived though an extraordinary event in the city’s history and maybe, I thought, people were right; that this was something I had to write about because, down the line, it might be something people would want to know more about. People would be curious….what was it like living in New York in September 2001?

Immediately, I realized that my real-life situation about my roommate search would be an interesting way to approach the immense and somewhat unapproachable subject of 9/11. The roommate conceit would provide a simple focus and a through-line for the play which was not about 9/11 at all. The main character has to find a roommate; that is his motivation and that is his goal. It’s a goal that is greatly complicated by the circumstances of the attack in that people who come to his apartment are filled with uncertainty, sadness, fear, loneliness, and the odd camaraderie that existed during the strange days of that autumn. But he is not saving lives at Ground Zero or cleaning up lower Manhattan. He is simply trying to find a new roommate so he can pay his rent.

Fortunately, since my own roommate hunt went on for so long (twice as long as in the play), I had written some notes on the many people who had come to see my apartment so that I could keep track of them all. I also had my semi-daily journal (which I’d been keeping since moving to New York) as a resource too. But I had never used it so extensively in my writing. My journal was deeply personal and, as such, had never really served as a true source material for my work. Sure, I got some lines, anecdotes, character ideas. But nothing like this, a two month period of time, had ever been the focus of my writing. It was a little scary to be using this and opening it up to the world.

Anyway, as I began to write what would become WTC View, my journal ended up being my roadmap and, because of that, a great deal of autobiographical detail entered into the play, easily much more than anything I’d ever written before. But not in the way I, or other people, might have expected. I’ve found the general assumption is that if a work is autobiographical, then the author is assumed to be the protagonist but, in my case, that rule doesn’t hold. Those true details from my journal didn’t just end up in the protagonist’s character or story. I am in all the characters of the play. My life was spread through the many roles in the play. In fact, in the stories they relate or feelings they express, some of those characters are closer to me and my experience than the lead character is. This wasn’t exactly intentional or meant to “hide” my life. It’s just a part of the messy nature of writing. Real life and fiction have a tendency to get all mixed up as you writer, revise, and write some more.

Whenever the movie screens or the play is performed (it recently had it’s off-Broadway premiere at 59E59 Theatre in May) and I’m around afterwards, people often approach me with a great deal of trepidation. They have just witnessed this main character go through a somewhat wrenching journey and I think the assumption is that it’s everything I went through as well. I can thankfully say, it is not. The protagonist’s journey in WTC View is, like that of the city he represents, a dark one: he goes through a lot of intense emotions to come out on the other side, with a surprising decision and a changed life. Though my life was certainly affected by 9/11 and I went through a lot of the same emotions, it was not in the same way or with the same intensity as the lead does. And we do not share the same end result, which [SPOILER ALERT!] is that he leaves his apartment. Lately though, I have given up trying to convince people otherwise….in person at least. They never seem to believe me anyway. Besides, I’ve noticed that I seem to care a great deal less about whether people think the show is an accurate reflection of my life or not. What matters to me most as a writer is that they believe the story I’m telling, that they believe its emotional truth and are ultimately moved by it.

Though 9/11 was the last thing I wanted to write about, I think I can say now that it’s easily the one piece of writing that I am most proud of. Maybe part of that is because I have a much deeper connection to this story because of its more autobiographical nature than the rest of my work, even if it is not the exact story of my life. The other part is that I feel like I accomplished what I set out to do which was portray that time period and all its contradictory feelings. In the end, I think the final piece captures that crucial moment in the city’s history in a sort of emotional time capsule. So in some ways, I feel like the question about whether it’s my story is moot. It’s both my story and everyone’s story at once…everyone who was living in New York in September of 2001. In a way, it’s like my attempt at writing an autobiography for the entire city as opposed to myself. At least that’s how I like to look at it.

Brian Sloan is a writer and filmmaker based in New York. For more information on his books and films, go to www.briansloan.com and www.wtcview.com. The photo above was taken by Julian Fleisher.