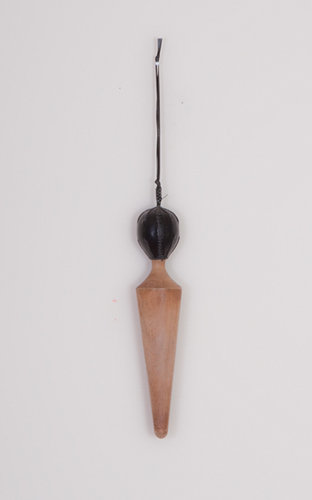 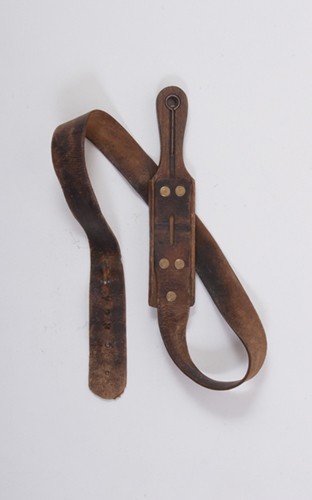 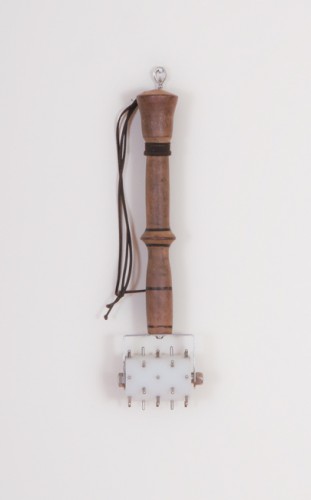 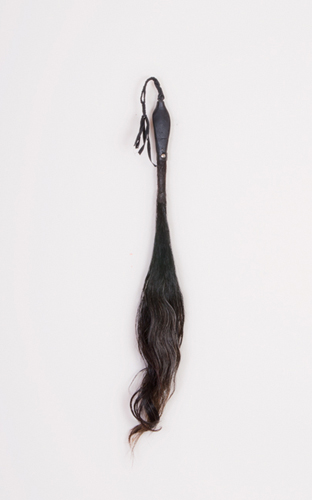 Since abandoning a lucrative advertising job in his native Colombia and moving to New York six years ago, Juan Betancurth has set about making work exploring the intersection of his sex life and Catholic upbringing. His latest project “For Faith, Pain and Pleasure” is a series of peculiar sculptures made out of vintage household objects that can be used for a variety of purposes, both kinky and holy. I met up with Juan earlier this week to explore the dual sides of his work.

You do a lot of different things in your practice. How would you describe it?
Honestly, I have a kind of hard time describing my work because of that. Sometimes I feel that it’s really complex. It has to do more with personal experiences, things that I want to do. My work depends on an idea or situation that I want to recreate.

Have there been similarities in the experiences you like to recreate?
It has to be experiences from my past that I want to overcome or understand. For me my work has always been a way to try and understand my reality and find out who I am. And I feel, if I have something from my past that’s limiting me, I just bring that out and put that in an installation, photograph, video, that I think is necessary, and it helps me out. It’s a tactic.

I’m most fascinated by the tool sculptures. Is there an experience surrounding that work that you’re trying to understand or deal with?
Yeah. The tools have different ways to be understood. One way is through my experience in the Catholic Church and the lives of saints, which I’ve always found fascinating and creepy and weird. What attracts me more than the Catholic religion itself is that the people who are involved with it are freaks. I feel attracted to that. Another thing to understand is the way that I grew up in Colombia. My generation was one of the last generations where we learned through pain and being punished. Teachers and parents were allowed to use violence in education, and that for me was really interesting. I think that my mom was really good at creating punishments, and I always admired her for how creative she was at it.

So these sculptures and the images of the sculptures are household objects are use to punish but also give pleasure.
Right. The way that I define that work is under the umbrella of – “For Pain, Faith, or Pleasure.” I want to keep the boundaries open. I don’t want to limit the viewer to seeing how I see. For me it’s more than the object itself, it’s more the idea and what can it provoke when people look at it? Somebody may like pain, or maybe somebody understands it as a tool for pleasure.

Are you still making sexual videos with the pain and pleasure objects?
Yes. I know that this body of work is kind of like close to sex practices, but I don’t want just to show that side. For me they’re just objects and however you choose to use them is up to you. It could be just an object itself. You could get off with it or beat yourself or someone else with it, or just leave it on the wall like another art object. I like to keep that ambiguity. I think it’s good in that way.

How much of your work comes from your sex life?
I think it comes more from my sex fantasies than sex life. I think mostly they tell things that I can’t do or don’t have enough balls to do. For me the objects are the opportunity to fantasize. Many times – a lot of those objects inspire me to create a fantasy that I’m going to use – and I feel satisfied with that. And at this point I don’t know if I am afraid to explore more or if just the objects themselves satisfy me.

Do you feel like after you make work you understand something more about yourself? Do the problems get deeper? Or do you feel satisfied?
Usually I get totally overwhelmed with all the information. But in the end it helps me to understand myself. In this particular case with the tools I’ve been finding and understanding things about myself that I was not expecting. It’s bringing out things about myself like how judgmental I am sometimes, and sometimes how I try to cover myself behind my work – a double morality. And I think that that is something that is only now showing up after this work, and that’s really interesting to me.

How does this work show that you’re judgmental?
I need to be punished or punish others. I think it’s really interesting to see that in front of me. I’m really selfish in my work. I work a lot from personal experience but I don’t think that’s the fact that makes me selfish. Its just what I like am looking for from my work – to find something that makes me better or happier.

As opposed to an artist who was trying to make the world a better place but really they’re not.
No, I don’t like to think about community. I don’t feel that comfortable collaborating because it’s not how I am naturally. I do it when it’s something that I feel a connection to, but it’s not coming from solidarity.

What are you working on now?
I got invited to a show about spirituality in Caribbean and Native American art. It’s a challenge for me because I really don’t want to be taken as an artist who works with spirituality, but that is definitely in my work and I can’t avoid it. I said yes because I’m looking for a different way to show spirituality without being pathetic. Usually that is boring, or really exclusive. I’m trying to do something – to show spirituality in a way that I feel which is that spirituality is as normal as sex. It shouldn’t be something that’s above us.

Meaning what exactly? For you spirituality is in the body?
It could be. There is no spirituality without being in the body and feeling your feelings. Feeling like I don’t know, it has to be something more down to earth. We’ll see. For me its kind of experimentation and that’s what I am doing now.

Has having a background in advertising helped you in conceiving an idea or exploring something?
I think advertising is a good school even though I don’t want to go back there. I use a lot of the methods I used in advertising to do research, to analyze people. One of the things I liked the most was focus groups, creating marketing strategies. I like the power of manipulation; it’s really interesting to me. I think that advertising is a kind of religion and I like religions.

It’s all tied in – spirituality, manipulation –
It works with the same elements, and I like that. I like to worship things. Lately I’m worshipping my appliances. It’s so stupid. The last thing I did was worshipping my fan. I like it because I like originality. I like things that make no sense. Religion for instance makes no sense, but I like it, because even if it makes no sense it works. And then – what I was doing with the fan, I was dancing in front of it. I turned on the fan so it moved by itself and let it direct me where to go. In a kind of silly way. And then I started to jerk off because I wanted to offer my cum to the fan. In the end I only had a few drops. And I broke it.

How?
Because I got too horny and in the middle I kind of lost my mind and I tried to stand on top of the fan and I broke it. But it was fun as an exercise – irrationality. That’s the kind of spirituality that I like to practice. Irrationality. And it works for me. I usually keep it in secret, as I like my intimacy, but telling people that could be fun. People can laugh or maybe somebody will feel motivated to do the same. The bottom line is I don’t want to try to create that as a rule or as a practice. If I find out two or three people are doing the same thing I want to stop. I don’t want to create followers.

You don’t think it’s unique to jerk off on your fan? No, maybe you’re right there probably is someone who loves to do that.
I’m pretty sure.