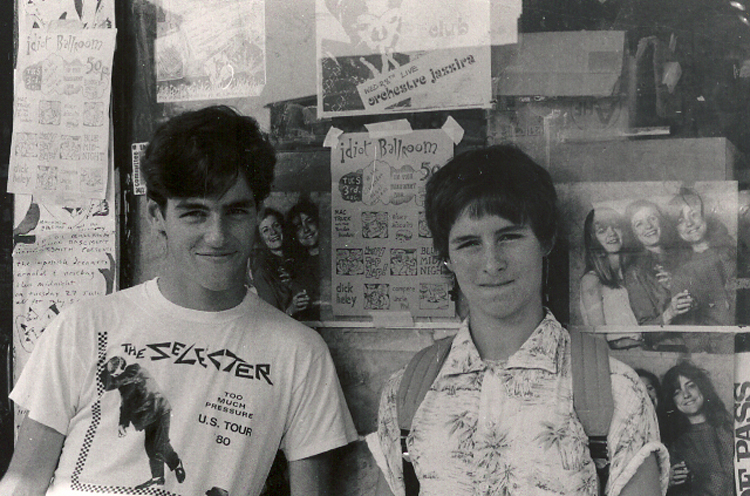 In the Art and Autobiography section, we’ll be regularly featuring interviews with artists from across the creative spectrum who create, or are attempting to create personal or autobiographical work. We’ll also be featuring examples of personal storytelling from many of these artists. For our first post, Obie award-winning playwright and one of the legendary Five Lesbian Brothers Dominique Dibbell has graciously agreed to share an excerpt from “Adam and Jane”, a memoir she is currently writing about her parents.

After an hour or so, maybe more, my father stopped into one of those Chinese food shops in New York that are very bare bones. Thick, scratched, and dirty plate glass front, approach the counter, order from the menu on the wall above, order taker scurries back through a door to the kitchen and delivers order. Wait 5 to 10 minutes, order taker retrieves your meal from the back and gives it to you. It is in plastic containers, in a plastic bag, and included is a plastic fork, maybe a napkin, and soy sauce and hot mustard packets. If you’re lucky, it comes with a free egg roll.

So we go into this little Chinese food place with my father, and it smells bad. It smells more sad than bad. Like death, sickness, and loneliness are their fare more than lo mein and spare ribs. I am having a moment of disgust for this food and the people who eat it. On the other hand, it is around lunchtime on a cold winter day and I have probably eaten a bagel about four hours ago so I am hungry. I would like to eat some of this Chinese food. Because sometimes, of course, very good food can come out of very sad looking places. Not usually, but sometimes. Also, I am new to New York, so I don’t know that most likely the food from here will be terrible. Also, it might not taste terrible to me because my tastes are not fully matured.

Father orders lo mein. He is asking us if we have ever had lo mein, and then he goes on a long meandering story about Vietnam and buying noodles on the street there. He does not ask us if we would like something. I think that is odd, but on the other hand, he is talking about these noodles like they are the best noodles in all of Harlem. “That is, if the cook feels like actually making the noodles he is really capable of. Because sometimes it is more like they are making food for dogs than for humans.” My father rarely discusses any subject without inserting some kind of scathing criticism of some part of it. My father has the “smarter than you” thing down. That may be the only thing he as left, and he parades it around frequently.

We wait for his order in the tiny, bad smelling place. It is very close and warm, where the outside is very cold, with a mean wind that likes to shoot up my jacket and down my neck and up through my wrists. Wherever it can find an opening. I wish I owned a pair of warm boots. I am wearing Nike running shoes. These are the shoes I run in. I also wear them around. I am feeling bad here in the Chinese food place. I am feeling a little dizzy. I would like to tear off my wool hat and my scarf and my gloves, but that doesn’t make any sense. We will be leaving soon. I don’t want to go outside either, to wander without knowing the plan from one strange, poorly lit store to another.

My father is droning on, holding our eyes with his crazy ones that never seem to blink. My brother has his hands in his coat pockets. He is looking down at the floor sometimes, which is linoleum and dirty, and sometimes looking up at my father to let him know he is still listening. He has a smirk on his face. A smirk seems to be the best way to interact with my father. He is usually saying something about how stupid someone or something else is and looking at us like, “Right?” So we usually have these smirks on our faces that could either mean, “Yeah, right!” or, “We are pretending to listen to you but you are crazy so we are not taking anything you say seriously at all.”

I don’t feel I can keep up the smirk all of a sudden. I don’t feel insulated any more from the fear and sadness I feel when I am with my father. I want to teletransport. I want to apparate. I want a different father, a different childhood. I want to have a mother and father I did not have to fear and that I could trust my whole self with.

What is this place? This dirty, crowded, threatening city. It is cold. What is this coldness? I am not used to any of this. I feel frightened here, and exhilarated. I feel lonely, and comforted by the crowds. I can get lost here. I have literally gotten lost here. I don’t yearn for home, because home is like a warm alternate universe where I will lose my soul. I think there is soul here, in New York City. Maybe I will find mine here.

The man at the counter hands my father his food. Father pulls out crumbled bills from the front pocket of his jeans. Coins too. He counts out the $4.79 carefully and lays it on the counter. I suddenly get the feeling that he wants us to chip in. But I don’t. I am still a child. I have never paid for a grown up’s meal. Or even pitched in. No grown up, let alone my own father. Him counting out that money and reluctantly handing it over to the man is the first and only time all day that he is quiet.

We walk the two blocks back to his apartment in the giant public housing high rise. There is a door that residents and visitors are supposed to be buzzed into by the security people in the booth, but the door is always broken and open. Everyone flows in and out. We take the elevator to the 11th floor and go into his apartment. His wife is not there. She is working. This is before they have children.

I can smell the lo mein and it is making me hungry. He sits down at the table, talking constantly. Low, slow, and sing song. My father does not have nervous energy, like you hear about New Yorkers. He is not jumpy. He is more zombie like.

He pulls out the tall plastic container of lo mein and dumps it into a large bowl. He uses the plastic fork and starts eating. He eats the entire large portion of lo mein. It takes awhile, because he eats slowly, and must talk all the way through it. My brother and I sit there and watch him. It was a large order, which is easily enough for two, but like the loaves and fishes, if shared in the spirit of love, would have been enough for three. He doesn’t offer us a thing. Not a fortune cookie, not a mustard packet, not a glass of New York City tap water.

At the time, being 18 and being used to adults around me behaving selfishly, I am not sure what to make of this. I try to explain it. But even to my victim mind, I cannot find any excuse for not sharing. For not taking your children who you see once in a blue moon, who you’ve promised 18 years worth of undelivered birthday and Christmas presents to a cheap, Chinese food lunch.

Dominique Dibbell lives nestled in the skirt of the San Gabriel mountains, just north of downtown Los Angeles. She is a mother and works a full-time job. Her theater company The Five Lesbian Brothers have been awarded an Obie, a Bessie, and a Lambda Literary Award. She herself won an Obie for her performance with The Builders Association.

Dominique Dibbell is a writer and performer. She is one of the legendary theater company the Five Lesbian Brothers. The Brothers have been awarded an Obie, a Bessie, and a Lambda Literary Award. She herself won an Obie for her performance with The Builders Association. She lives nestled in the skirt of the San Gabriel mountains, just north of downtown Los Angeles, where in between mothering and a full-time job, she is writing a memoir about her parents, called “Adam and Jane.”