When filmmaker Avery Willard didn’t use the penname Bruce King, he developed his films under the title of Ava-Graph Films. These pieces weren’t for commercial use, they were the kind of art he would create in his apartment specifically targeted for a small audience, then tucked away in a box until now. This coming weekend, In Search of Avery Willard  will screen with a rare full program of Willard films, Unveiling Avery Willard, at the International Film Festival Rotterdam, January 26th and 27th. END_OF_DOCUMENT_TOKEN_TO_BE_REPLACED 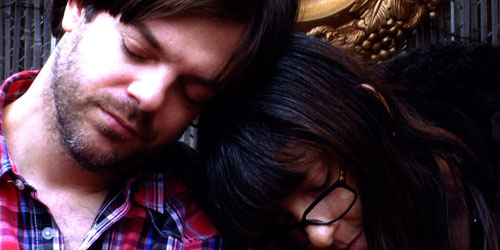 Jonathan Caouette is a filmmaker from Texas. His first film, Tarnation, debuted in 2003. In Tarnation Caouette incorporated over twenty years of footage to tell the story of his growing up and his relationship with his mother, Renee Leblanc. The film was executive produced by Gus Van Sant and John Cameron Mitchell. He also directed the 2009 documentary All Tomorrow’s Parties,  on the British music festival of the same name, and the experimental short film All Flowers In Time, starring Chloë Sevigny. His third film, Walk Away Renee, debuted at Cannes Film Festival in 2011. Walk Away Renee conveys the story of the voyage Jonathan and his mother make to move her from Texas to New York City, where Jonathan has lived for many years. The film begins its New York theatrical run tomorrow, November 30th, at IFC Center.

Kyle Tidd: Hi Jonathan! Thanks for agreeing to do this interview. This was my side of our imaginary conversation, feel free to respond however you want, it can be totally unrelated, as you please.

Jonathan Caouette: Oh thank you, I am more concerned about passing out at the moment…I’m on pain medication from a fall last week, I’m waiting right now for a lot of test results to come back…I hope it’s nothing too bad…I just turned 40 and had to cancel my celebration plans and have made two doctor’s visits and two trips to the ER just in time for the opening of Walk Away Renee.

KT: Whoa, I hope everything’s ok! I’m only going to ask you a few questions then you should rest. Is there a connection between the title of the new movie and the 1966 song by The Left Banke?

JC: Yes, The Left Banke is one of my favorite bands of all time. My mother turned me on to Walk Away Renee (the song) and Pretty Ballerina when I was a baby. Also, if it weren’t for The Left Banke there would be no Belle and Sebastian…

KT: Would you say Walk Away Renee is to Tarnation kind of like what Amnesiac was to Kid A, i.e. material salvaged from the first work that elaborates further on the relationship set up between you and your mother in Tarnation?

JC: I love that analogy, yes it is! Well, actually in a nutshell—and I’m half joking about this—but for me, in a sense the film essentially feels like it could be an opulent DVD extra, an easter egg, on disc two, for a 20 year DVD (or whatever the format will be in 2024) anniversary of Tarnation…that I somehow traveled forward in time and stole it from myself just before I put it on that disc two DVD and then came back and just, well, presented it now in 2012.

JC: I kid you not, and I’m not trying to sound like James Franco or anything, but I have seven projects in development, all of which are going to come down the pipeline as it were in beautiful even-keeled paced succession. One of these is in fact a narrative film I’m writing and directing about time travel.

KT: Can you talk a little more about your interest in time travel?

JC: Yes. Long story short, I wish I had a time machine so that I could leave this time and go back to, I don’t know, 1950 and live until 1986. I love the subject and I am really interested in exploring it in a way that I don’t necessarily think has been done before; the idea of completely personalizing that story really excites me.

KT: And the relationship between time travel and cinema?

JC: Well, I feel a bit like John Cusack in High Fidelity. I associate specific memories and directly correlate the memories to music and films that I had seen during particular times in my life.

KT: I realize that Walk Away Renee was made in relation to certain practical considerations (the need to move your mother to New York from Texas), but it my understanding that you have always wanted to make a classic roadtrip film. Would you say a roadtrip is like time travel in some ways? Your mother moved to New York in part because she was receiving inadequate medical care in Texas. There seems to be an undercurrent in your work between cinema, time travel, and story-telling. Could you talk about that?

JC: YES, but if I answer that all the way right now honestly and detailed I would be giving away the plot of the film, which I can’t do right now.

KT: I understand. Apparently there was a segment cut from the film that had to do with a Wilhelm Reich cult group called the Cloudbusters. Are you a Kate Bush fan?

JC: Huge, huge huge fan. She is like my demi-goddess. I grew up listening to the likes of Kate Bush, Lene Lovich, Nina Hagen, Le Rita Mitsouko, etc.

KT: Why were the Cloudbusters cut from the film?

JC: That scene, coupled with a lot of other scenes coupled with a structure that I could not properly and comfortably digest, was screened at Cannes. The Cannes version of Walk Away Renee is an entire book in itself. For me it was the right film but the wrong version at the wrong time at the right festival. I was so unbelievable gobsmacked grateful beyond words to have the opportunity to show the film as the work in progress at Cannes. But that version became re-tooled about three times just after that showing. The new and final version will be present at IFC this Friday, November 30th. My family and I will be at the last showing of the night. I’ll be on crutches!

END_OF_DOCUMENT_TOKEN_TO_BE_REPLACED

In New York, change is part of the landscape. Cherished stores, theaters and bars close and neighborhoods are always in flux. Case in point: The Starlite Lounge, Brooklyn’s oldest African-American-owned bar for gay people of color, was founded in 1959, the same year as Brown vs. Board of Education and ten years prior to the Stonewall riots in Manhattan. Mackie Harris, one of New York’s first gay black business owners, wanted to create a safe, non-discriminating establishment for his community in Crown Heights and it remained open for over 50 years. But all of that came to an end last summer when the Starlite Lounge received notice to vacate. Filmmakers Kate Kunath and Sasha Wortzel were intrigued by the story of a beloved neighborhood bar and cultural institution forced to shut its doors. Their new full-length documentary The Starlite Project asks the questions: “How does an institution like the Stonewall survive, but the Starlite cannot? Who decides what cultural and historic landmarks are preserved and what memories can be erased?”

This Sunday, catch a sneak preview of a rough cut of the film with Kunath and Wortzel, followed by a discussion with owners of the Starlite, Gay New York author George Chauncey and other special guests. The screening will take place 6-9pm at the Guggenheim Lab First Park (Houston at 2nd Avenue). For more on the project, visit the site here.