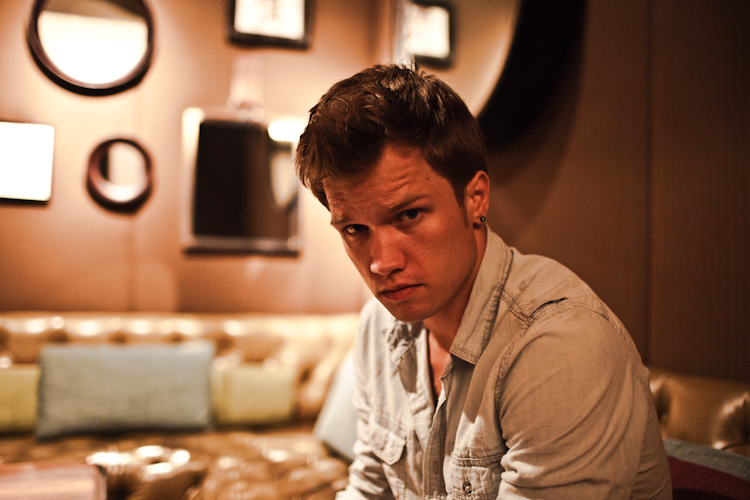 Shooting sex. A difficult thing to write about. There’s a good long essay to write about it, if one had the skills, because there are so many moving parts to the story. The thing I’ve begun to notice with this film, on this set is that as we’ve shot more of it—and there’s been a lot—there is a familiarity about it that I’m guessing is not unlike what begins to happen on porno sets. My deeper hope is that the set of the movie is not unlike the movie itself, meaning that the openness of our approach to shooting these scenes makes these types of moments less foreign to the grips, to the gaffers, to myself as a director. That we are making a movie about openness and bringing sex into the picture (into the light), and so it becomes visible, familiar, easy to talk about. That we are making a movie that keeps the lights on.

I have no idea what the crew thinks, what goes through their heads. My feeling is they are just doing their job, focusing their lenses, setting their lights, putting on their make-up. One more scene in which the dialogue is groans and fake orgasms. Didn’t Catherine Breillat make a movie about this?

And the actors? Funny, friendly, open. They are the ones that are making these scenes work. Yesterday’s accident: We are shooting the hotel room scene where Erik finds Paul and then a hustler arrives (we are in the Smythe hotel, not unlike 60 Thompson, where the “scene’ took place in real life, six years ago now….) and there are two parts to the sex scene: an initial make-out, then an off-screen blowjob, then fucking, at which point Erik enters and takes Paul’s hand. Our first shot we were able to see dicks and ass, which means we were not able to shoot any full-on sex (no blow jobs, no fucking) because we aren’t having actual sex (or at least that part of it: all sex in movies is real, because the actors are touching each other in some form or fashion, bodies against bodies). But then we move the camera position and tighten the lens, and we can now simulate a blowjob— the head is below the frame, mostly, and in front of where the penis would be. Zach and Chris Lenk (another non-professional whom I met through my friend Ioannis, who saw Chris riding down the street shirtless on his bicycle and thought he’d be right in the role) are getting into it and then suddenly Chris manages to move the scene forward, they are now fucking (pretending to be, but it looks very believable through the lens), and it feels real and sudden. Thure is sitting in the other room (it’s the first scene in the film he’s not actually in, so he’s relaxing, reading a book, taking a nap), and I realize we are somewhere in the film it would not be easy to get back to, that the sex looks so real we have to continue. So I call “Erik” from off screen and Thure understands. He walks into the scene, into the movie, and sits on the bed next to Zach and Chris (“Paul” and “the hustler”). The camera is panning and finding the shots; I am calling out to the actors from the side “take Paul’s hand” “do that again,” and to Thimios “pan towards Chris,” “pan towards Erik”). Thimios is operating beautifully. The shot looks nothing like I could have ever blocked. It has happened.