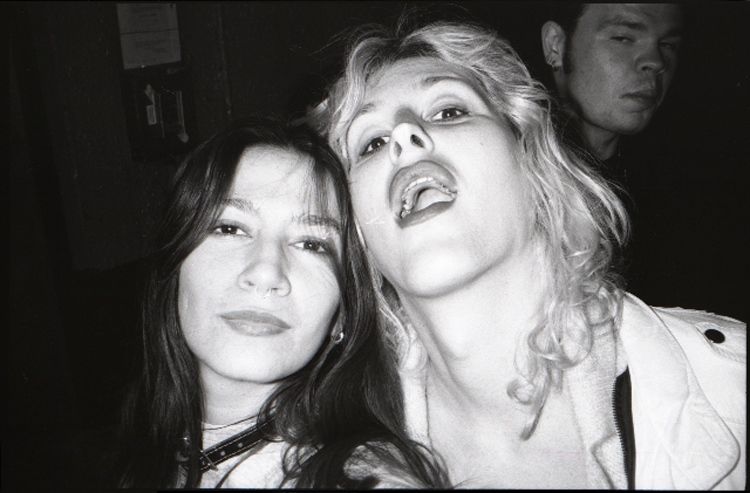 I photographed Chloe a lot. With her band, with lovers, with friends who looked like her, with her dog, alone, nude, clothed, with writing on her body: “precious diva” “family” “love tummy.” When I finally decided to make a film, she had to be in it. It was a girl gang movie, Gang Girls 2000 Betsy came up with the gang name, Blades, which I elaborated to the Famous Blades of Chinatown, prompted by the freely given use of Chloe’s Chinatown apartment as the gang headquarters. Chloe was to play the leader of the gang. I said, “What should your gang name be?” She didn’t hesitate. “Transella Coutorture,” she replied.

She called me from the hospital a few weeks into the shooting; she said, “Katrina, we should shoot a scene for your movie here. I just got surgery I have this huge scar. We can say I got cut in a gang fight!” We rushed over, all the Famous Blades, and wrote the scene on the spot. Nan Goldin was supposed to come shoot her that day but Chloe pushed Nan off for me and I felt like I meant something to somebody for once. She was supportive of my vision, and that meant the world to me.

I helped Chloe with groceries. I visited her in the hospital. When we had places out of town we would invite her up, or she would invite herself! She loved nature and horses. Weekends in the Catskills, weeks in the Hamptons, road trips to Florida. We would ride in the car singing along with Patti Smith at the top of our lungs. Chloe let me know how grateful she was to have holidays out of town; she made sure I knew that I was doing her a great service.

Her fight for trans rights and for the rights of people with AIDS is well documented. I was proud of my friend who would go into police precincts to teach the cops how to treat trans people well. She started an equestrian riding program for at-risk youth called Equi-Aid. She would tell me the only time she wasn’t in pain was when she was riding horses. Or when she was helping someone and being of service.

She resisted taking the HIV meds for the longest time. She was doing holistic healing, no white sugar or wheat, herbs. Eventually she went on the meds and she struggled with those all throughout the rest of her life. She told me the AIDS meds made her bones brittle. She broke her back falling off a horse, which I knew broke her heart a little as well. But she came over in her back brace, which she had painted gold and decorated with rhinestones, and we made a portrait of this amazon warrior. The brace had become proud armor, the emblem of her love of life and of the ongoing battle against a healthcare system that was failing her.

That’s the strongest part, the beauty in simple transformation. She held the power of a humble goddess who could take a cracked and broken thing and make a beautiful other thing out of it. Male to female, she embraced the trans in transgender, the in-betweens, the crack between the worlds, the class schism. Making light of welfare level poverty by wearing Gucci to the welfare office. Chloe reveled in that, with an irreverent glee. I feel Chloe offered me a great education in compassion, and in facing death and illness with grace, and in the spirit of service.

Chloe was always a little tangential in conversations, she riffed like jazz and you just had to nod and smile; but after the pain meds came in, she was way off the page. I’d stand there thinking, and finally saying, “Honey, I love you but I have no idea what you’re talking about.” It’s important to know that this was because of her meds, which, increasingly, were coming in pernicious combinations. When she was hospitalized in June of ‘10, we thought maybe it was the end, because she was acting really deranged. But a few weeks later, she was out and more clear and lucid than she’d been in years. She’d gotten off the pain meds and it seemed like things were on the upswing.

By winter of that year she curated the Transeuphoria gallery show on east 9th street and we all went. It was an amazing moment for all of us, the room crackled with excitement and love. I was so happy and proud to see her accomplishment, her visceral, confrontational and often hilarious art. The art of her partner T, the paintings of Siobhan all were instructive to me, I felt like I was invited in.

She had reached out to me and often I wasn’t there for her. Everyone said this in the days and weeks after her death. It came as a shock to me, even though over all these 17 years there was always a consciousness of her mortality. People were and are still dying of AIDS. In her case, the combinations of medications made her very ill, and she simply couldn’t handle it in the end.

In February, I found out from Alice that things got really bad. Alice asked me if she could bring Chloe over to my place after she got out of the hospital so she could just be in my living room with loving people around. I said of course. My home has been a sanctuary many times; and it’s where we’ve had many a gathering including a few queer Thanksgivings. Alice later texted or called to say Chloe wanted to come but didn’t think she could manage the stairs.

She died a few days later. I got a call from Alice about it; in her typical dry style she gave me the news. Alice was in a state of shock, I could tell the emotions hadn’t hit. I was stunned. I reached out to Betsy, who immediately, untypically, burst into tears. I called Antony, and Rita. We all gathered at Antony’s place that night to meet and talk. T, Kembra, Kelly, Rita, Alice, Betsy, Ned, Viva. Artist witches, recovering addicts, queers: a beautiful family of self-created phoenixes. We centered around love for Chloe whether we had been friends or lovers, mentor or the mentored. We talked about honoring her. We cried.

Chloe’s memorial service, her CeleVation was organized around and by this group. It’s strange to say that a memorial could be viewed as good experience. But I think many people felt this way. It was truly one of the best experiences of my life. Judson Church was filled, overflowing with people who had known and loved Chloe. Viva was the high priestess, elected by acclaim by the rest of us. Many people performed. Betsy compiled and read the instant messages Chloe had written and we heard Chloe talk to us in her style. It made us all laugh. I compiled a video, and we together witnessed the early days, the more lucid version her. Alice compiled the photos. Antony sang. T sang. Gifts were given to organizations that help queer kids and  people with AIDS.

It was a collective, thoughtful, anarchic, goddess-driven process that worked.

Many people said they felt Chloe was definitely there and loving every moment. The room was filled with love. Puma took a picture of me while I videotaped and an orb appears right at my ear. I say the spirits were moving.

This post was republished from the author’s personal blog. For more photos and writing by Katrina Del Mar, click here.

Katrina del Mar is a New York-based art and commercial photographer, as well as an award winning film director. Her work has been described as "beautiful" exuding an "intimate chemistry" and also as "filth of the highest quality." Katrina herself has been described as a "major league cutie," "a wild woman," "the Lesbian Russ Meyer," and "apparently, the lesbian stepchild of Kenneth Anger." Katrina has been a photographer for over 20 years. As a freelance photographer, her client list includes Sony Music, Island Records, Polygram, V2 Records, London Records, Time Out New York, People Magazine, Alternative Press, Mademoiselle, and the NYPost. Katrina directs and produces independent films and music videos, commercials, short documentaries, reality television segments, and TV for the internet. Her work has been exhibited in group and solo gallery shows, museums, and club installations. She is a proficient in multimedia design, production and publishing. Katrina writes, directs and produces award winning independent films. Her first film, Gang Girls 2000, shot entirely on super 8mm film, received a 4 & a half star review in Film Threat Magazine, and received glowing reviews from the press, inviting comparisons to the legendary Kenneth Anger. The follow up, Surf Gang, about a gang of women surfers from Rockaway Beach in New York City, landed Katrina a prestigious Fellowship in Video from the New York Foundation for the Arts (NYFA) and Best Experimental Film Award from the Planet Out Short Movie Awards announced at the Sundance Film Festival in 2006, and was screened at the Museum for Contemporary Art (CAPC) in Bordeaux, France. Her latest film project, Hell on Wheels Gang Girls Forever , completes the Girl Gang Trilogy & was the recipient of the Accolade Award of Merit and has screened to sold out shows in NYC, London, Berlin, Indianapolis, Sydney, Auckland, Atlanta, Boston and San Francisco.